The mysteries of the Andalusian horse

He served Charles V, Francis I, Louis XV as Napoleon.Not a royal stable, not a portrait in majesty were worthy of the name without its presence…Of all the species in the Iberian stud farms, the Andalusian horse, also known as the “pure Spanish breed”, nicknamed the “Carthusian horse” in the Pyrenees, occupies a special place.His fabulous story, his aura, are at the heart of the Arte documentary this Friday.

The owner of two Andalusian horses, the Dutch director Mario Dirkx wanted to understand how the lineage of this haughty animal with a grey coat, an affable temperament, who fears neither battlefields nor bulls, could remain intact for six centuries.Winner of an award at the Equus Film Festival in New York, her survey, which was the result of participatory financing, crowns seven years of hard work.

Travelling through Andalusia, Mario Dirkx met with other horse lovers: a poet, a keeper of breeding records, a breeder, a bullfighter, dressage aces…He films the animal as closely as possible in his antics, in his mane gallops in the wind.It’s like being on the stage of a ballet when the quadruped stands on its hind legs or walks Spanish.

It is in these dreamlike moments rocked by a discreet guitar that the film Le Cheval andalou, monture royale is the most captivating and successful.If Mario Dirkx’s explanations on the origins of the horse are full of astonishing anecdotes, we are a little lost in a confusing chronology that comes and goes between the eras.

It was the Carthusian monks of Xérès who, at the end of the 15th century, by accepting as payment from a tenant farmer in debt two mares, daughters of a famous stallion, founded the first breeding farm.The religious, very concerned about the purity of their breed, went so far as to refuse the request of their sovereigns Ferdinand of Aragon and Isabella of Castile who wanted a cross with the Neapolitan horse.

Anyway, this is the gift par excellence that we give to the monarchs neighbouring Spain.As for them, they are free to make “misalliances” within their livestock.The Andalusian greatly improves the quality of several European horse breeds and is one of the first equidae to touch the soil of the New World.Each caravel of Christopher Columbus carried a dozen brood mares!

Despite the decline of the cavalry, the Napoleonic wars, the departure of the Carthusian monks, this horse did not disappear.On the contrary, it has even become an ideal mount for herding cows or entering bullfighting arenas.His docility has also imposed him in dressage competitions over the last twenty years, where he is gradually gaining ground on his most distinguished rivals, such as the thoroughbred…the fiery subject of Mario Dirkx’s next film. 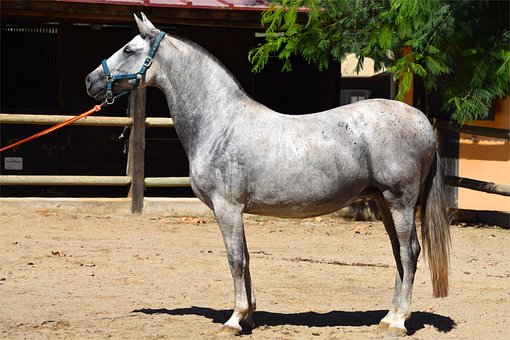